Our second meeting in 2013 took place in Ljubljana and was kindly organised by Ms Helena Devetak. Besides some general topics that were discussed, our main subject was the finishing of our mutual homepage, which is almost complete, and future cooperation with other law groups.

Additionally, we were joined by Ms Daniela David from Bucharest, Romania, who presented her law firm and the areas of law she works in. She expressed her interest to join ULN and the members gave their unanimous assent to her application.

As Mr Gaetano Sardo’s chairmanship ended with the end of the meeting, Pauline Le More, who was already elected back in our meeting in April, will from now on succeed him. We understand that this means a lot of additional work for her and want to express our sincere thanks for accepting this responsibility.

In our meeting in Munich we had the pleasure to welcome Ms Katalin Préda from Budapest who had been invited by Ms Helena Devetak as an observer of the meeting and potential member of ULN. After Ms Préda was so kind as to introduce herself and her Law Office to the assembly, we decided to accept her application and admit her into ULN.

Furthermore, we were for the first time joined by members of ALBO Group. We all agreed on future cooperation and organising further joint meetings.

On Friday 12th we had the chance to discuss and work with this meeting’s essential topics ‘Data Privacy Protection in Europe’ and ‘Transfer Pricing’.

Since the rotational chairmanship of our Chairman Gaetano Sardo ends in September, an election of the new Chairman/woman took place. Unanimously elected was Pauline Le More, who, as of September, will be in charge until springtime 2016.

After our meetings in September 2011 in Vienna, where we had the possibility to welcome our new partners Gordons solicitors, London, UK and April 2012 in Luxembourg, where we invited our new member Eva Krajova, attorney-at-law from Prague, Chzech Republik we just finished our meeting in Sofia with the main topic 'mediation proceedings in Bulgaria and discussion about mediation in Europe' with a welcome to our new partners from Barcelona/ Spain.

'Online gaming in Europe' was the subject of our Friday's workshop presented by our guest M. Jaques Marceau, Founder of the public relations agency, Aromates, Paris and our Colleagues Me Véronique de Meester, Luxembourg and Me Pauiline Le More, LL.M., Paris. During the meeting of the partners one day later we had the possibility to welcome our new partners from Slovenia, Mrs. Helena Devetak - Slovenia, Mrs. Andrea Hellmann - Germany, Mrs. Vibeke Ek - Norway and Mr. Markus Bulgarini, Austria.

The next meeting 2010 took place in the high North on board of MV "Polarlys" heading to Tromsö, office of our norwegian colleague Gunnar Nerdrum. During this meeting we had the possibility to welcome our new partner from Sofia, Bulgaria - Mrs. Svilena Dimitrova, Attorney-at-Law.

Having celebrated our 10th anniversary in may 2010 in Amsterdam it seems now about time to recollect about our common experiences, and say a few words about the beginning. Many important things starts from the kitchen and ULN does set an exception when 10 years in july 1999 a few colleagues from England, France and Germany met in the famous Bierhaus Päffgen in Cologne. In December same year the foundation members met in London and in April 2000 the first official meeting was held in Paris 5 rue Taylor. - Leonard Goodenough - read: "A short History of ULN".

The first meeting in 2010 and the 10th Anniversary was celebrated in Amsterdam with the interesting lectures and discussions about the legal consequences of the financial crisis. Our Chairman Yves Rosenoer is retiring after his two-years-period succeeded by our Colleague from Milano, Avv. Gaetano Sardo. And finally - we had the possibility to welcome a new partner, coming from Vienna, Mag. Thomas InderMaur.

IPG Photonics Corporation (NASDAQ: IPGP), Oxford/MA (USA), the world leader in high-power fiber lasers and amplifiers, announced to the public and filed to the SEC the aquisition of privately-held, Germany-based Cosytronic KG, a specialist in automated welding solutions. To close the transaction IPG was advised by the German accounting firm Schaefer Zimmer Hardt, Bad Marienberg, which is partner of ULN

The senior partner of our partner firm Schaefer Zimmer Hardt, Germany, Mr. Hans Rainer Schaefer, was appointed as university lecturer of the International University of Applied Sciences Bonn-Bad Honnef. He will be active in the course of study 'Audit & Taxation'. His first lecture was held about the subject 'Auditing internal control systems'.

The General Meeting in 2009 took place in Belgrade. The topic of our workshop on October 16 was the possibility of enforcement of foreign judgements in Serbia. Furthermore we had the possibility to inform ourselves about the progress of the reform of the judicial system in Serbia with regard to the future membership of the country in the EU.

Our first meeting in 2009 has been on May 22, 23 in Athens. This meeting gave us the possibility to discuss the impact and possible outcome of the economic developments of the previous six months and the conclusions for the work of lawyers and tax consultants. Beyond we had the possibility to welcome our new french partners Nathalie Palmyre and Pauline Le More from Paris and Chantal Le Barbier from Lyon.

The General Meeting of the Partners of ULN took place in Zurich on September 20. Dr. B. Gino Koenig, Solicitor from Zurich was guest of the workshop on September 19. His fascinating lecture on "Arbitration in Switzerland and the Swiss Rules of the Chambers of Commerce and Industry" was followed by an inspiring discussion.

The first meeting 2008 of the ULN Partners took place in London on 16th/ 17th May with an interesting workshop in the Swedenbourg Hall and an exciting dinner at the Athenaeum Club, hosted by our former Member Richard Sturt. The meeting was successfully organized by our Colleague Mel Pack, solicitor in London and we warmly welcome our new partner Michael Parramore, solicitor in Amsterdam.

One of our former members, Richard Sturt (now retired), was awarded an OBE in the Queen's New Year's Honours List.

Richard, formerly the senior partner in the firm of Mowll & Mowll, adds the OBE to his many other awards including an honorary Doctorate of Civil Law conferred by the University of Kent in recognition of his contribution to the field of maritime law.
Our congratulations are passed to him.

With effective date January 1, 2008 the former company Schäfer & Hardt, auditors and tax advisers, Bad Marienberg/Germany is merging with the office of Mr. Stephan Zimmer, tax adviser, Betzdorf/Germany. Mr. Stephan Zimmer offers a long experience in tax advising especially for small and medium sized entities. After the merger the new company will continue its activities under the firm "Schäfer Zimmer Hardt" at the three locations Bad Marienberg, Betzdorf and Mayen/Koblenz. 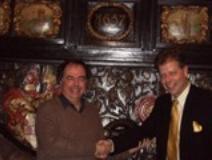 Our chairman, Gerrit Van Setten is retiring after his two year period of office and is succeeded by our Brussels colleague, Yves Rosenoer, with the unanimous endorsement of the members.

Our thanks were extended to Gerrit for his sterling leadership during which time the ULN has continued to expand and grow in strength. Thanks were also extended to our Director, Nicolas Meyer, for his unstinting efforts in maintaining the administration of the organisation.

On the Friday before the AGM, Dierk Nickelsen conducted a highly informative workshop on maritime law and issues of liability in respect of cargo transportation.

Our Bremen colleagues were kind enough to provide some superb hospitality. In addition to the pleasure of our meeting coinciding with the opening of the Christmas market, a visit was arranged to the Becks Brewery.

The weekend was rounded off with a thoroughly enjoyable dinner at the Bremer Ratskeller that included a tour of the fifteenth century wine cellar containing the legendary rose wine of Rudesheim dating from 1653.