This year´s last meeting took place in wonderful Milan. It was very well organized by our Italian ULN-partners Gaetano and Gianluca Sardo.

After a short get together we had our conference at the Bianca Maria Palace Hotel, where Prof. Avv. Fabio Ziccardi, formerly Professor of Comparative Law, held a lecture about “Evidences and expert testimony in arbitration”. Afterwards all members had an interesting discussion on the topic.

The next day, our general meeting took place. After talking about several on-going projects like our social media performance, the main topic was the discussion on the offers for our new website. In the evening we enjoyed a guided visit of the city and saw Leonardo Da Vinci´s "The Last Supper", before we had dinner.

The spring meeting of 2018 took place in the beautiful city of Helsinki, where it was organized by our Finnish ULN-partner Gerrit van Setten.

The weekend began with a trip by ferry from Stockholm to Helsinki. On board we were listening to an interesting lecture about „Structuring cross-border acquisitions and investments in Finland“ held by our colleague Erik Jaanti.

Afterwards, the meeting took place in Helsinki. After a nice welcome by Nicolas Meyer we discussed the consequences of the GDPR for ULN and other important matters regarding the ULN Law Review and our website. However, the main topics related to both the challenges of the digitalization in an international context and legal tech joint projects of ULN. 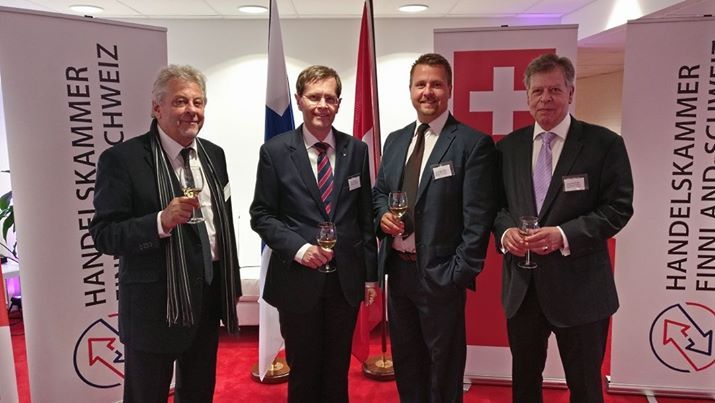 ULN member Gerrit van Setten, attorney-at-law in Finland, has been nominated the Representative in Finland of the Zurich based Chamber of Commerce Finland-Switzerland (www.handelskammer-fin.ch). The nomination has been announced on June 14, 2017 at the occasion of a joint reception of the Ambassador of Switzerland, H E Heinrich Maurer and the Chamber by the Chamber´s president, Mr. Felice Romano.

The reception was attended by over 70 guests representing Finnish and Swiss business and institutions. The Chamber in co-operation with the

Finnish Business Meeting Part Ltd now offers a contact and meeting point in the center of Helsinki for their members.

The services are also available for ULN members and their clients.
For further information please contact Gerrit van Setten, +358 40 500 90 30 or [email secured by javascript] (www.vsp-law.com)

Our last meeting of the year took place in the wonderful city of Prague. It was very well planned by our czech ULN-partner Eva Krajova. Due to international guests from all fields of law we could gain a lot of new and useful information during discussions and presentations.

The weekend started with a workshop about doing business in Czech Republic and the most discussed topics in the country. Afterwards we had a sightseeing program and finished off the day all together to establish the personal relations between the partners. The following day we discussed the future of the UL-Network as well as the hot topics in the world of law.

All in all it was a great organized meeting with a good combination of work-related appointments and cultural enjoyment in one of the historical centers in Mid-Europe. Moreover we could strength and extend our international connection.

The first meeting of 2017 took place in Cologne, where it was organised by our German ULN partners. We were joined by international guests from different fields of law, by Mr Henrik Nilsson from Sweden, Ms Marion Lingot from France, Mr Ajit Anekar from India and Mr Carlos C. Gomes from Portugal.

After a nice welcome by Nicolas Pantelidis, Nicolas Meyer gave us a short report about the latest developments. Afterwards, we had a round table discussion about general matters, like the organisation of ULN and the possible establishment of a permanent board. We later on had the pleasure to hear a discourse on the topics „Europe after Brexit”, the elections in the Netherlands and “France & their political and legal consequences“, by scientist and historian Siebo M.H. Janssen.

Between our work-related appointments, we enjoyed the historical center of Cologne and visited the Drachenfels, a mountain wreathed in numerous German legends.

After our first meeting of 2016, which should have taken place in Ankara, sadly had to be cancelled due to the local political situation, the second meeting took place as planned. The meeting was organised by Ryszard Armatowski and held in Warsaw, where we were joined by members of ALBO Euro-Consult, an accounting and law professionals’ association, in most of our activities.

After a joint meeting, ALBO guest speaker David James gave a lecture on tax pitfalls in Poland, possible solutions and preventive actions, followed by a round table discussion on the topic. Paul Duvaux filled us in on taxation of Polish companies in France, defining permanent establishment in tax law and relevant experience in the different EU countries.

Aside from a few organisational matters, we went through questions concerning the upcoming ULN Law Reviews and held the election of the new chairperson of ULN. We are glad to announce that Mr Yannis Pantelidis was elected as our new chairman and will from now on lead our organisation.

The second meeting of 2015 took place in Budapest, where it was kindly organised by Ms Katalin Preda.

Apart from a few organisational matters we discussed, the main topics related to our website and the upcoming ULN Law Review. We talked through some changes that were applied to united-legal-network.com during the last few months. In order to make the site more clearly arranged and user-friendly, its contents were rearranged and a contact form was installed. Regarding the first Law Review of 2016 you can look forward to contributions from Mr Hakan Cinar, Mr Thomas in der Maur and Ms Véronique De Meester.

Our first meeting in 2015 was held and organised in London by Gordons Partnership LLP.

We had the pleasure to hear a discourse on “Buying property in UK” by Mr Mike Slade. The matter of buying real estate in different countries will soon be given attention on the website as well, so Mr Slade’s talk was of great interest to all of us. Later on, the topic was even complemented by a lecture on taxation aspects of property purchases in UK, given by Mr McMullen from Smith and Williamson accountants.

The third topic we had the pleasure to hear an expert’s opinion on was “The European legal market: a banker’s perspective”, a discourse by Chris Bolton from Barclays Bank.

We are pleased to announce that „Media Law International“, „the exclusive guide to leading media law firms around the world“ rates Hoehne, In der Maur & Partner Rechtsanwaelte OG number 1 in 2015’s „Ranking Table“. The analysis is based on interviews with clients as well as corporate media directors and advisers. The ranking’s survey-based rating can be read here.

This year’s second meeting was held in Barcelona, organised by Raich Lopez & Diez lawyers and chaired by Ms Pauline Le More. The topics discussed were of mostly general nature, as we needed to agree on some changes in the organisation of our network. New ways to improve the ULN-website, as well as potential members, were agreed on.
We also had the pleasure to welcome Mr Shevtsov from Moscow, Russia, who kindly presented his Law firm EMPP and areas of practice. Since all of the ULN members, as well as the partners of his law firm, agreed, he will be admitted into ULN as of the end of 2014.
Later on we all had the pleasure to attend a Conference of the General Director of Industry of the Government of Catalonia about the purchase of companies in bankruptcy, which was very interesting and informative to all of us.

After a short report about general recent developments concerning ULN, all of our members had the chance to present their law firm’s news as well. While Nicolas Meyer let us know about a new platform on law in Africa, Georg Hartmann informed us about the foundation of his new law firm Dittmann & Hartmann. Effective as of the 1st of May 2014, his membership will change from a single to a law firm one.  The second partner representing the firm will be Andreas J. Tryba, whom he introduced to us as well.